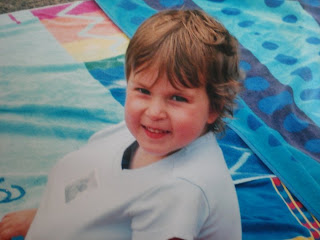 I’ve been without one for the past few days, thanks to laryngitis. I have also been feeling spectacularly shit physcially, which is not like me. My lovely friends have been brilliant at helping me with the children, as all I’ve been able to do is lie in a dark room taking painkillers to dull the razorblades in my throat.

The week started so well, too.  Celeste was in need of a treat so I took her to London on Monday.  I thought she’d like to see Chinatown.  “Do you speak Chinese, Mummy?” I told her no. “How will we know how to ask for our lunch?” Hmmm, not sure. Anyway, we found a fantastic greasy spoon packed to the rafters with diners, of which we were the only non-Chinese. From there, we wandered down to The National Gallery where she asked me, “Are we back in England now, Mummy?”  We did a children’s audio tour, which was FABULOUS and Celeste loved every minute. I wish they’d had those for one of the many trips we took round the Louvre when I was young.  Still, I suppose it didn’t destroy my love of art galleries.  Celeste chose the NG (over Madame Tussauds and the others) as her treat, and Elodie laughed at my pleased face when she did.

When you have lots of children (I won’t say “four” but “five” isn’t right either) it’s hard to make time for each of them.  But it’s so rewarding when you do. Imbued with how special the occasion was, Celeste asked me on the way into London whether I had done this with the others.  Elodie has been the one who has had most one-on-one time with me, because I felt she needed it. “Did you take Juliette out?” asked Celeste.  I realise sadly that I had not.  “We were together so much in hospital…” I started, before the awfulness of justifying myself with this dawned on me.  Time in hospital, ill, was hardly quality time for Juliette.  And yet, there were many special times there.  The truth is I was stretched so thin with the other children being as young as they were, it never occurred to me to do more than what was essential. We did have the two holidays in Southwold, but other than that, we were just surviving.

Juliette’s photo is at the top of this post a propos of nothing, except that I like it.  It was June at my parents, about a month before she died.  She was cold and not feeling very well – you can tell because although she is smiling for the photo, her brows are still furrowed the way they were when she wasn’t feeling well.  She came and sat on my lap after this picture was taken.  At nearly 14, would she have wanted to spend the day with me?  I think she would.  She always preferred adult company.  I can see her wanting to act.  Perhaps we would have seen plays together, like Elodie and I have seen ballets.

One odd thing about being voiceless this week are all the times I’ve had the impulse to say (or shout) something which I physically cannot.  Though initially frustrating, there are times I’ve been grateful the sentence was not said. This week it’s as if a lot of my words have been mouthed in a dark cave but as some of those words were thoughtless or cross, I think we’re all happier for it. I’m typing in bed, thinking lovely thoughts about the boys playing some computer game beyond my open door, laughing and reciting lines from some American show I’ve never seen, while the smell of bolognaise cooked by Steph wafts in.

It’s good to be feeling a bit better and writing my blog again.  A lot more people read it (and thank you so much for reading) than comment – perhaps my often self-indulgent meanderings don’t invite thoughts.  Anyway just to say, comments are always welcome.  I’d feel less like I’m mouthing words in that cave.