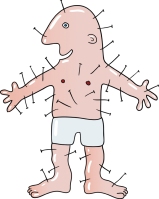 Elodie was a beautiful baby. Her facial features were small, except for a pair of huge, blue eyes, fringed with Betty Boop lashes.  She reminded me of a baby bird.
When she was about a month old, she developed eczema. It was worst on her face which she would scratch until the blood poured. In desperation I would restrain her hands, breastfeed her, sing to her, anything to distract from the itch which tortured her especially at night.
Seeing her skin, strangers would recoil in horror. Once, a local shop owner peered into the pram.
“What a pity,” she gasped.  “I expect you want to take pictures of her, but you can’t because of the way she looks.”
We shopped elsewhere after that.
I remember the final conversation I had with our GP about Elodie’s skin. He shrugged, and said they had “nothing left” in their armoury to help her, and that we were just going to have to hope she grew out of it. Until then I had not considered althernative therapies, but from that point I was on a quest.
A friend from my NCT group suggested homeopathy, and cranial osteopathy.  We tried both.  The homeopathy had subtle effects, but the cranial osteopathy was dramatic. She slept better almost immeditately and her skin started to improve.  Within six months her complection was perfect.
I took Juliette to a herbalist when her leukaemia was diagnosed, and I think it helped with some of the effects of chemotherapy. For a while, we visited a healer every week.  Juliette liked the act of escaping our noisy house for a couple of hours and I did too. It was peaceful and nurturing, but she still died.
I’m aware that my reaction to Elodie’s illness may be disproportionate.  Unfortunately, knowing this does not seem to help me loosen the wires that have sprung taut, taking me back to another time and another daughter. But this is now, and I can only move forward, not back. On Monday, I took Elodie for her first acupuncture appointment.  I’m not expecting miracles, but she really does seem a little better.  Still tired but perhaps not as acutely, and her mood has definitely been better.  She goes back again on Tuesday.
I’m know that to continue raging against the situation is futile. As when Juliette was ill, some moments difficult to avoid, but they sabotage positivity.  Elodie needs my strength and as there’s little else on offer right now, I would be an odd sort of mother if I didn’t do everything I could to make it available for her.